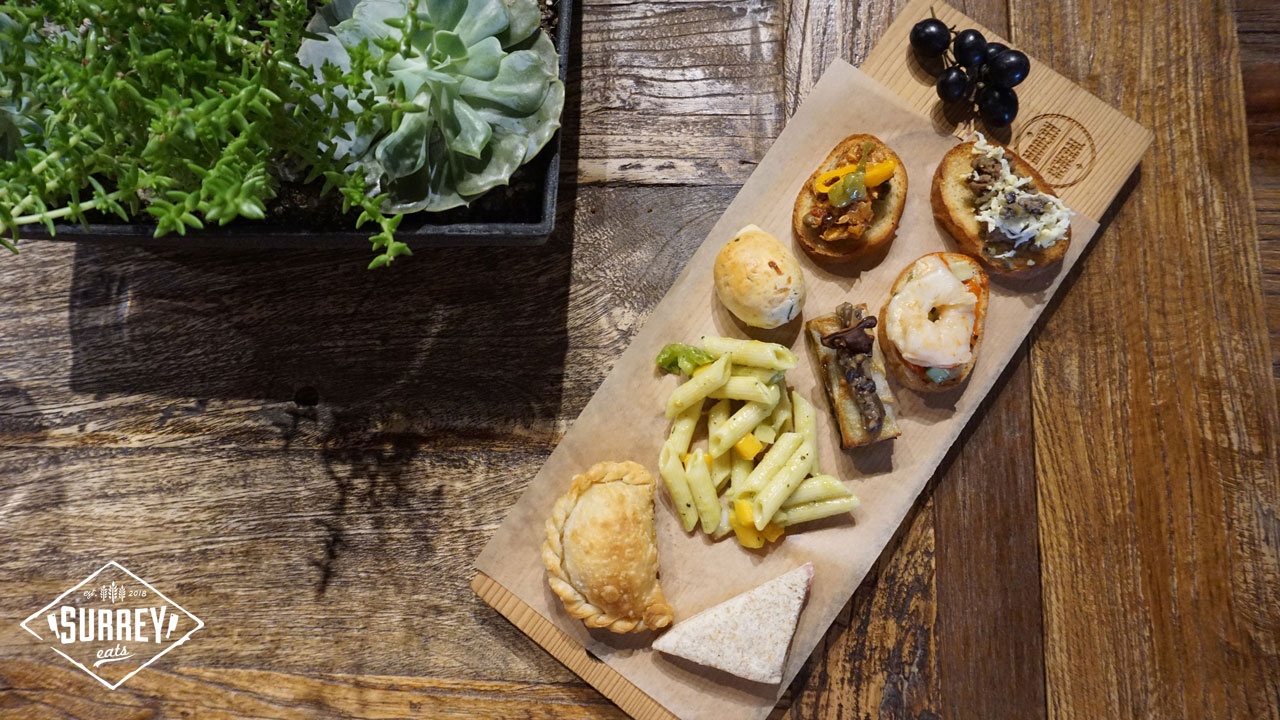 After several fun-filled evenings at The Modern General’s Fun Food Fridays, Surrey Eats decided to partner up and gather some local foodies for a Tapas Takeover at Modern General on a sun-soaked summer evening.

So Modern General is short for The Modern General Store Inc. and yes this rather unlikely setting for fine dining small bites tapas is a general store by day. However every Friday night their Rosemary Heights digs are converted to an Argentinian food-lovers paradise for food, friends, and fun times.

The store has a visually appealing Japan-esque architectural style on the exterior and the interior reminded me of something you might see on the Island, kind of along the lines of the Coombs marketplace with a mish-mash of higher-end local goods including shelves stocked with plenty of healthy organic groceries, art, housewares, plants, and much more.

We kicked off the event at five o’clock (The Modern General’s Friday dinners run from 5-9 PM) and it didn’t take long to get into full swing. Regular price for the dinners will set you back $30 but you’re welcome to stay all four hours and eat to your stomach’s content.

Chef Cristian Palermo was lauded for his work at Lupo and he brings that fine dining expertise to Modern General as he works tirelessly to restock the tapas buffet with creative concoctions on an ever-evolving menu. Each week offers new selections to drool over. The Modern General also features the former baker from Fieldstone Artisan Breads and they bake delicious small-batch offerings fresh each day so be sure to take something home from their bakery section when you visit, you won’t be disappointed!

The theme is Argentinian and Italian-inspired small bites to match the chef and owners’ respective heritages and everything is just too cute for words. But hopefully these photos will do! Just grab a plank and load up, and don’t worry too much about trying everything in one go. The selection is just too vast to be picky and is restocked throughout the evening.

Drinks are on hand with complimentary and refreshing strawberry-lime water and a revolving selection of fine beer, wine and prosecco for those who wish to imbibe. You can also select drinks from The Modern General’s selection of artisanal soda, juices and coffees including local faves 49th Parallel Coffee and Silk Road Tea.

Running clockwise from bottom left Round 1 started off with a simple tramezzini (a small crustless sandwich) of prosciutto cotto and Havarti.

The Corn with Confit Onion Empanada brought back fond memories of Jollibee’s Tuna Pie from an old Philippines trip. An appealing mix of subtle sweet and savoury.

The Chipa, an Argentinian tapioca bread, was baked with gouda cheese and jalapenos and was oven-warm and tasted just like something mom would make. If your mom was an anarchist baker in late 1800s Argentina that is. I won’t digress too much here but if you want to read the fascinating origins of Argentinian pastry names click here and have a gander.

The Pollo Cacciatore toast was a wee bit spicy and loaded with capers, onion, red pepper and olives then topped with banana peppers.

It paired nicely with the Prawn toast two spots over which cooled the palate with a cucumber salad and a mild pepper sauce.

Round 2 brings us the triple-decker Salami e Provolone tramezzini, which was so dainty I felt like I was being served afternoon tea at the Empress. Wolfed down in two bites and back to those adorable lil toasts.

Italian Chorizo with Criolla sauce was probably my top pick of the litter. Criolla is a type of Argentinian salsa with onion, red and green bell pepper, tomato, oil and vinegar diced up all teensie-weensie for maximum cuteness overload, and it went smashingly with the oily and flavourful chorizo. Feta cheese and garlic butter put this dish over the top as I greedily gobbled up several more throughout the evening.

Another epic win for Modern General was the Orange Cream Goat Cheese and Roasted Beet toast which featured a slice of strawberry and more criolla. I really want to stock up on this criolla stuff and put that ish on EVERYTHING. It was super versatile if you look at the contrast between the last two toasts. The next sriracha perhaps?

Dessert was a white chocolate plum mousse with crushed Modern General cookies and orange tuille. Tiny pieces of chopped mango dotted the surface. The tuille was like a zesty creme brulee crust and it was a race to the bottom as I dug my little (of course) ornate spoon in to get to those yummy Modern General cookie crumbles. Lip smackingly awesome!

And those spoons. A mug full of unique selections was brought out with the dessert including a frickin unicorn! I don’t know why but at the time I thought this was just the epitome of bad-assery. Maybe it was all that bubbly going to my head…

As per tradition here’s a slideshow with some highlights of the evening. Follow us on social so you can keep up to date on all Surrey Eats Pop Up events and come join us for the next one! In the meantime be sure to pay Laura and Cristian a visit at Modern General and let them know who sent you. Find them on the map below. Buon appetito!

Di Reggae Cafe – The Best Caribbean Restaurant in Surrey BC?

The Samosa House – This Ain’t Your Auntie-Ji’s Samosa!