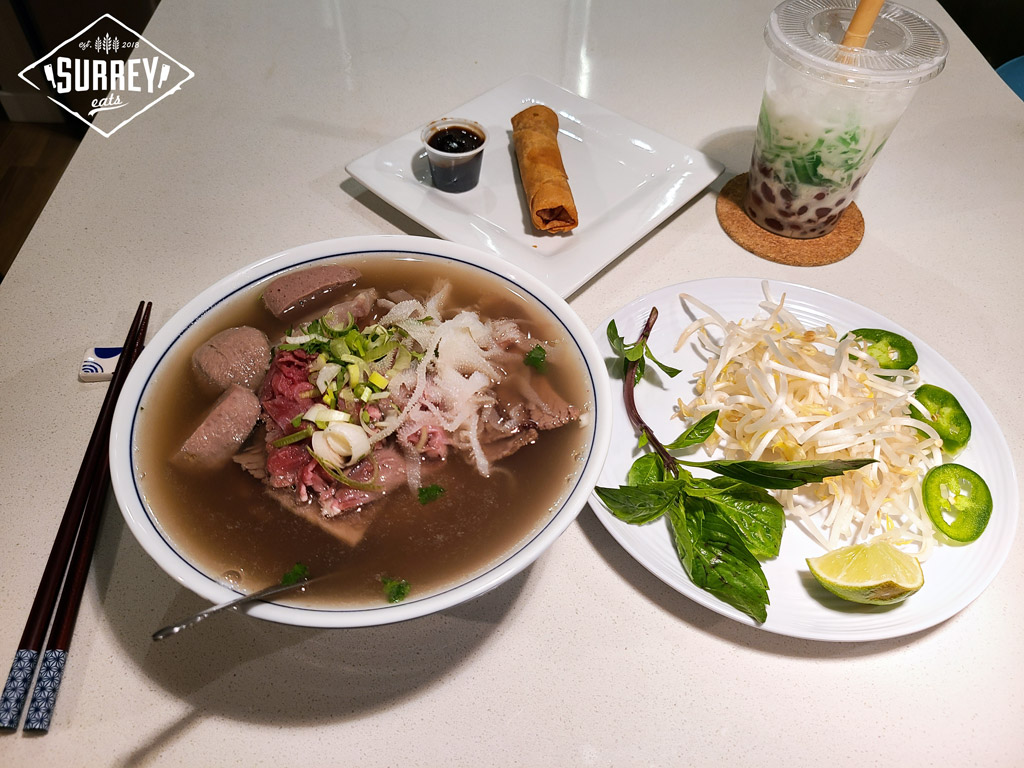 Pho An Nam has taken the reigns from former T&T eatery Saison in the Central City Mall here in Surrey. While I used to be a regular way back when it was Bubble World I never quite cottoned on to Saison, finding it rather pricey and pretentious for what they were serving. So I was pretty excited to hear Richmond hotspot Pho An Nam had quietly crept in while we were quarantined and opened up a Surrey sister location since it’s a hop, skip and a jump from my place.

And location is everything when you order pho since you want that broth fresh and piping hot, especially if you like to start your beef off rare as much as I do. For those who don’t equate take-out with Vietnamese soup, there’s a shot above of how they make it work: Broth in one container, noodles and meat in the other to keep the noods from getting all soggy and thick and yucky. The toppings come in a plastic baggie so they stay fresh and don’t get wilted by steam or heat or what have you.

BYOB (Bring Your Own Bowl) so you can mix, and have some sriracha, fish sauce, and chili garlic sauce on hand if that’s your jam. And protip alert: you’ll want to pull apart the noodles with your chopsticks once they’re in the broth since otherwise they’ll stay clumped up in the shape of the container.

I got my usual Pho Dac Biet/House Special with as many parts of the cow as you can stomach (and maybe some you can’t!) but the rare beef is always a standout. Tempting to just let it melt on the tongue like sashimi…

But I played it safe and dunked it in with the rest of the toppings in my Pho An Nam “Special Special” Mixed Beef with Rice Noodle Soup ($16.50 for a Large combo). And when pho joints say “Large” they ain’t playin. Even using a big booty ramen bowl I had to ever-so-slowly submerge the container contents into the broth to avoid spillage. Couldn’t even fit any toppings on until I’d taken a few bites!

But when they say “special special” (actually in the description from their menu on Door Dash) they just might be selling you a load of tripe. Literally. This is your basic house special with some brisket, three meatballs, one generous slice of tendon, the aforementioned rare beef, and yes, a massive load of tripe.

The bubbly broth was clear and flavourful, but overly sweet. Meat and noodle portions were just the right ratio though and overall it was an enjoyable bowl.

The combos at Pho An Nam come with the usual spring roll side, but this little guy was in fact special special without the hyperbole. Thick hunks of sweet mystery meat (the sweetness was appreciated more in this case), tiny slivers of carrot and glass noodles were ensconced in a crispy, oily wrapper that added a satisfying crunch to compete with the softer mouth feel of the pho ingredients. Even the hoisin was extra special (and extra spicy!) with a darker colour than I’m used to. Thoroughly enjoyed.

And unlike any other pho place I’ve been to Pho An Nam also gives you dessert with your combo (or Vietnamese coffee if you prefer)! And it’s the famous Three Colour Dessert no less! Which makes it special special special 😮

I’m gonna admit here that I snuck a few sips of the delicious coconut cream before snapping this pic, so you can expect your cup to be filled to the brim. The three layers are red beans, mung bean paste (tastes kinda like a sweet salted egg yolk), and strips of pandan jelly. Coconut sauce and small chunks of ice round off the package. Unfortunately they skimped on the mung bean layer which happens to be my favourite, but that layer is especially rich so maybe less is more in this case since I did really enjoy the tidbits I discovered here and there in the center. In fact I’m craving another one as I type this so that’s always a good sign.

I’m looking forward to exploring Pho An Nam further; their Sate pho (#30) comes with all rare beef and has a flame next to it on the menu as a spice warning…what more could I want in a bowl? I’ll be back to try it for sure, especially since they are offering 10% off on take out orders right now and that’s all I’m comfortable doing anyway these days.

Overall I enjoyed this meal a lot more than the one we did for our last Vietnamese restaurant review. Pho An Nam left me purring like a cozy kitten, so I’m off to go ensconce myself in a wrap of my own and crawl under the covers for a catnap. Xin chao for now folks!